On the 16th of November , the Express Entry Draw results for immigration to Canada came out, a draw which saw a slight decline in the points required by candidates applying for permanent residency status in Canada, thereby yielding a record high number of invites.

In the 24th express entry draw 2,427 Express Entry applicants received invitations to apply for PR visa to Canada with 470 being the minimum CRS points required. The number of ITA’s issued in the 24th draw showcases the highest rise observed so far. The latest Express Entry shows the highest number of invitations to be received by candidates to apply for permanent residency since it initiated in January 2015, but the minimum point requirement is relatively high when compared to earlier draws in spring primarily due to the backlog of candidates being almost 450, owing to the fact that  the number of ITAs were reduced in the summer.

In the previous draw, held on November 2nd, 2016, 2,080 candidates received the ITAs for permanent residence in Canada. The minimum CRS points requirement in the 46th draw was 472 points which has decreased to 470 in the current draw which is a trend that truly showcases why Canada is a haven for immigrants.

It was forecasted by an immigration official this year that in September and October, number of invites to candidates would increase to 2000 per draw. The 2,427 invites in 47th draw proves that the ITAs would continue to increase in the near future in the Express Entry Draws and the minimum CRS point requirement will indeed continue to decline. 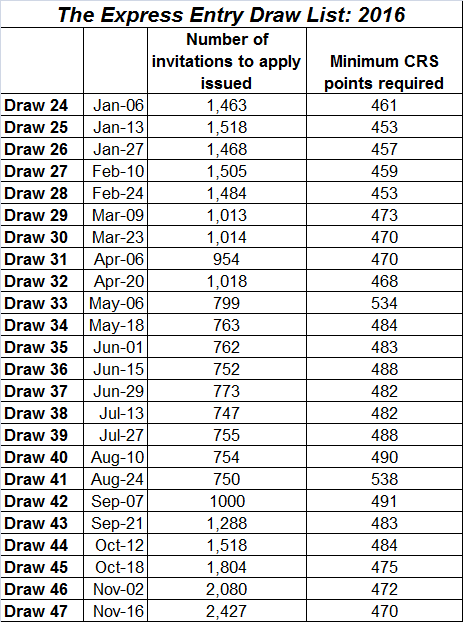 For more details on information for immigration to Canada, contact Global Tree for expert counselling in the area of immigration. Let us guide you through the tedious visa documentation process with utilizing our experience, learned over a decade of experience.

Home About Us Immigration Other Services Recent Visa Blog Contact Us